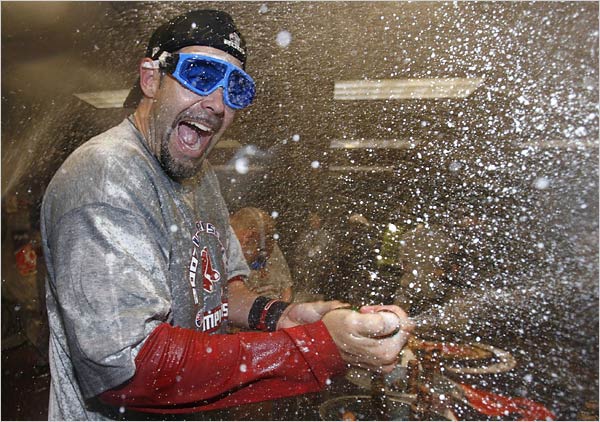 In the same year that J proposed to me in Boston, the city where we both went to college, the Boston Red Sox won their second World Series in four seasons. 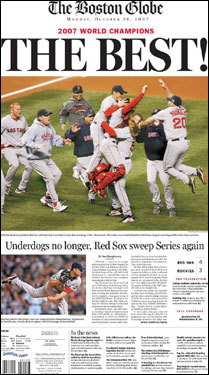 It was their 7th World Series win. The win last night also ended a seven-game winning streak that began in Cleveland with the ALCS.  Ahem, seven is my lucky number.

Obviously reality shows aren’t completely real, but I’m bummed to hear this about The Hills.

When I got to the end of the new Williams-Sonoma catalog, I gasped out loud. “I want this!” I exclaimed. The brand spankin’ new Cuisinart Cup-O-Matic Coffeemaker uses either coffee pods or ground coffee to brew a single cup at a time. I’ve always wanted a Flavia machine, but the individual pods are so expensive. With the Cup-O-Matic, I can splurge on pods for specialty drinks but use regular ground coffee for my morning cup. I can’t wait for this to hit Bed, Bath & Beyond so I can add it to my registry!

On Shelterrific this morning, I learned about a new Dirt Devil KONE hand vacuum — a white illuminating version. I already liked it; it’s attractive enough that you don’t have to hide it in a closet, meaning it’s easier to get to when there’s a spill. Also, when something is in plain sight, I’m more apt to use it. But this new version does more than just sit in plain sight — it glows!

One other thing I’d love is a Missoni-inspired ripple throw blanket. I think something like this would be fun to snuggle under. Some people (aka J) think the pattern is obnoxious, but I see it as “playful vintage.” It could be made more modern depending on the color palette.

Thank goodness I misread the time for “No Reservations” at the cheap-o movie theater last night. Instead of sitting through what would have been a lovely, yet bland, romantic dramedy, J and I picked up some Bronco’s (so ghetto!) and headed home to watch Game 7 of the ALCS championships.

We sat in front of the TV for hours. Every time the Red Sox made a good play, my arms shot up in the air and I “whooped.” We cheered and yelled along with the fans in the stands. We both wished we could’ve been there!

An 11-2 win over the Cleveland Indians. Next stop, World Series! On Saturday J and I attended our first Huskers football game in Lincoln, NE. Although the team has been disappointing so far this season, every game is sold-out. I got our tickets from somebody I work with, who has season tickets. We got a ride to the game by a guy who belongs to our synagogue and parks in the VIP section right next to the stadium. Any closer and we’d have be getting out of the car straight onto the field. He and his son sat on the opposite end of the stadium, so J and I were free to explore the insanity that is a Huskers game all on our own. You are not allowed into the stadium unless you’re wearing red. I think that’s the rule. Corn heads. After all, their official name is the Nebraska Cornhuskers. Doesn’t that invoke the fear? Coin flip. The Huskers were playing the Aggies from Texas A&M. “Aggies” is a dumb name, don’t you think? It’s not even a real word! It has something to do with the fact that A&M is an agricultural school. We were given a red balloon to launch when the Huskers made their first touchdown, which happened during the first quarter. They made one more before halftime; they must have thought they played hard enough during the first half because when they came back to the field after halftime, they didn’t even try. It was an embarrassing defeat.

Up until the end of the third quarter, when it became obvious that the Huskers were going to lose, J and I had a great time! Plus, we only spent $11 on the whole experience (we splurged on stadium burgers and popcorn). We’re learning that it’s good (and not too difficult) to “know” people in Omaha. The guy who drove us to the game is a close, personal friend of Warren Buffett. Seriously.