Rock Scissor Paper has extended its summer sale through August 1st. Use the coupon code “summer” to save 20% off everything in their store, even off merchandise that’s already been reduced.

Lancome’s new vibrating powermascara, Oscillation, won’t be available to the public until the end of the year, but until the end of today you can buy a limited first-edition tube at Sephora.com and Lancome.com.

Have you heard of this product? It immediately made me think of Spin Pops, those candy/toy hybrids from the early 90s. Battery operated, Spin Pops spun your lollipop around in your mouth so you didn’t have to do the laborious work of actually licking it. Tell me you remember Spin Pops!

Anyway, back to the makeup… With a press of a button, Oscillation:

How do you feel about the idea of putting a vibrating mascara wand near your eyes? Would you try this product? No, this is not a photo of me. I didn’t “trash my dress” after my wedding. It’s hanging in my bedroom closet in my parents’ house, exactly where I left it after the wedding weekend. It’s safe and sound–but dirty. I haven’t let my mom take the dress to be cleaned and preserved yet because she thinks that the neighborhood dry cleaner will suffice. I’m not so sure about that. This is my wedding dress we’re talking about! But I know that taking it back to the bridal salon from where it was purchase will likely cost several hundred dollars, and I’m not sure I’m comfortable with that option either.

Fabulous Stationery‘s Stripes Sale ends tomorrow at midnight. You can order a box of 25 personalized cards featuring their classic stripes designs for just $25 (that’s $10 off the original price). Use them as thank you cards, invitations or couples cards.

I’m really digging the green and blue combo from the Stripes 2 series. I think I’d personalize them with my new last name. Down in Kansas City, I bought a sheet of Snow & Graham wrapping paper at Paper Source with the intention of framing it and hanging it in my bedroom. Initially I thought I’d frame the entire sheet, which was approximately 30″x20″, but when I was shopping at Michael’s on Sunday, I became concerned that the delicate pattern would get lost inside such a large frame. Instead, I picked up this 11″x14″ frame and cut the paper down to size. I love how it looks, especially next to my framed Mati Rose print. Now I just need to find the proper spot on the wall for the two of them.

JHill Design‘s paper line, Places I’ve Never Been, features bold patterns and designs representing different locations around the world that designer Jennifer Hill has only visited in her imagination. Her drawings are inspired by what she’s read or heard about these places.

Jennifer’s looking for inspiration for designs for her 2010 calendar. You could win a gift pack of notebooks, note cards, a 2008 wall calendar and a 2009 desk calendar just by sending Jennifer your ideas on locations she should consider. Email her at pihnb@jhilldesign.com by August 1 to qualify. Three random winners will be picked after the 1st.

What would you suggest? What’s the most exotic place you’ve ever been? Comment below!

(via Pret a Voyager) 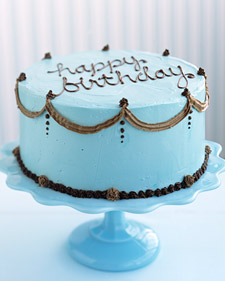 Today is my sweetheart’s birthday. I wish we could be together to celebrate his special day.

I love you, chicken.

I’ve read every single issue of domino since it hit newsstands back in 2005. It immediately became my favorite magazine. I was just moving into a new apartment in the city and looking for decorating inspiration. However, three years later, I’ve become a bit disillusioned by it. I can’t put my finger on the exact reason. Maybe because I can’t afford anything they showcase? Maybe because the rooms they feature are too styled (and so RANDOM!) and not necessarily realistic. I’m not sure.

Nevertheless, I’m still excited for domino‘s first book, which I just learned about via decor8. Interesting choice not to use a photograph of a decorated room for the cover image…

What did I buy at Anthropologie this weekend? This decorative dessert plate with an initial that’s important to me. I’d love to hang it with some other small plates I’ve purchased from Anthropologie in the past, maybe in my kitchen above the sink. Ugly is Pretty was also inspired by Lisa – great layout

I also bought this ceramic egg crate. When I first showed Jamie my find, she questioned what I’d do with it. “Use it to store my rings!” I replied enthusiastically. I don’t know who would actually use it to store eggs; I think it makes a splendid jewelry holder. Lest you think I only bought housewares, I also purchased a Plenty by Tracy Reese short-sleeved wrap shirt that was on sale from $218 to $49.95.

If you’ve used plates as art, I’d love to see your photos!