Besides men’s figure skating, I’ve enjoyed watching anything have to do with snowboarding this Olympics – specifically, anything having to do with men on snowboards (see Shaun White, above), including snowboard cross and half-pipe. Don’t worry ladies, I’m not totally prejudice. I was rooting for my girl Julia Mancuso during the women’s ski events. (I may be the only American who is not a Lindsey Vonn fan. She just seems like such a diva. And, as someone commented on Twitter, she looks like a Seventeen magazine cover model from the 80s. Not sure that’s a compliment.)

What haven’t I been enjoying? Ice dancing! The costumes themselves almost make the “sport” unwatchable – and I’m not really convinced ice dancing is truly a sport. It’s definitely more of a performance, isn’t it? What do you think?

The pics in this post are from a photo essay by Ryan McGinley, The Highfliers, which beautifully captures some of our favorite Olympians up in the air, doing what the do best – including Mollytic‘s favorite, Johnny Weir (below).

(via you are my fav)

Shame on me for not paying any attention to the U.S. men’s figure skating team before last night’s short program–especially the theatrical Johnny Weir. Thankfully Mollytics’s enthusiasm for the self-proclaimed Russophile is contagious. I wasn’t sure what to expect from his performance, as I had never seem him skate previously — I thought he was going to perform to Lady Gaga’s “Poker Face” — and I found him to be graceful, strong and artistic. Boo to those who say he isn’t as much of an athlete as the tall, dark and handsome Evan Lysacek. Here’s a secret: you HAVE to be athletic to pull off the jumps and spins that ALL of the figure skaters do.

Some of the tweets I read about @johnnygweir during the men’s first competition were disheartening. His fans truly that homophobia impacts how he is perceived by the commentators and, maybe, the judges. Sure, his pink corset and single shoulder tassel were a bit effeminate, but were Evan Lysacek’s ruffles and wrist feathers any more masculine? (Sorry, Vera Wang.) Did Johnny not execute his program nearly flawlessly? Yet all the commentators could talk about was his costume and his off-the-ice antics. They ignored the fact that he, too, is competing for a medal. Boo, again.

Per Mollytics, I followed Marissa’s live blogging during the men’s short program and look forward to her (and her mom’s) thoughts during the long program. And just so we’re on the same page, I would be happy if Evan were to win the gold medal. I just think that Johnny deserves to be taken more seriously. Go Team U.S.A.!

Click here for a great piece on the theatrics of men’s figure skating. 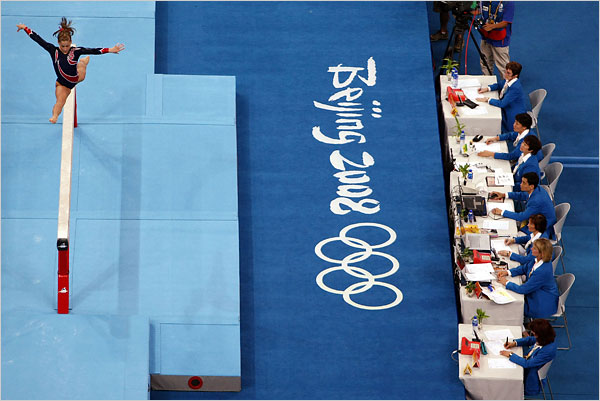 Congratulations to Shawn Johnson for winning gold on the balance beam. While she may not be as graceful on the beam as Nastia, her routine was rock solid and athletic. Truth be told, I was getting sick of Nastia winning everything, anyway. Shawn deserved her chance to shine, and yesterday’s event final was it. 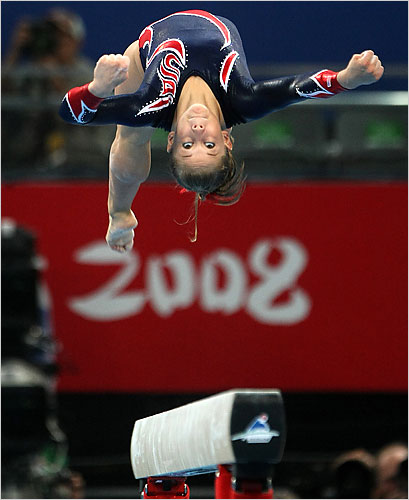 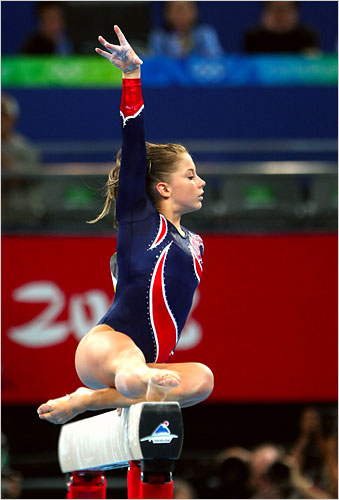 And now that swimming and gymnastics are over, I can finally start getting to bed earlier.

Since Michael Phelps won his first gold at these Olympics, I’ve been curious about the material and weight of the medals. Are they solid? Plated? How much are they each worth?

I found many of the answers to my questions here (via Pret a Voyager). I had no idea that the reverse side of the Beijing Olympic medals are inlaid with jade. Did you?

Noble and elegant, the medals are a blending of traditional Chinese culture and the Olympism. It gives the winners of the Games great honor and acclamation as recognition of their achievement.

The IOC has strict stipulation on the Olympic medals’ material, identification, weight, size and drawing. The medals for the champion and the runner-up are made of pure silver, and the champion’s medal must be plated with gold weighing not less than six grams each. For the first time jade is used for the Olympic medals. The design not only meets the IOC requirements, but also expresses praise and honor that the Chinese people cherish for the Olympic Spirit and the Olympic athletes.

Thank goodness for Slate. I now know why and when the horse was replaced with “the tongue” in gymnastics.

Why the equipment change?

In part to facilitate more impressive acrobatic feats, and in part to reduce injuries. The so-called vaulting table—nicknamed “the tongue” by gymnasts—was first developed in the mid-1990s by the Dutch gymnastics equipment company Janssen-Fritsen. The main impetus for the switch was a series of crashes that occurred at the 2000 Olympics in Sydney, when several gymnasts either rammed into the horse’s front end after mistiming their approaches or botched their landings after misplacing their hands on the push-off. Although these mishaps were ascribed to a calibration error—the vault had been set 2 inches too low—the International Gymnastics Federation also began to consider whether the old-style horses were too hazardously shaped.

The table, which Janssen-Fritsen calls Pegases, made its international debut at the 2001 world championships in Ghent, Belgium. The front edge slopes downward and is thickly padded, so an accidental run-in hopefully won’t cause broken bones; a collision with the vertical face of an old-fashioned horse, by contrast, was more likely to be a disaster. The Pegases also boasts a larger surface area for the competitors to place their hands on, so a little midair shift to the left or right won’t have catastrophic results. Lastly, the table’s top is more cushioned than the horse, to lessen the blow in case anyone lands on it headfirst.

The larger surface area has also made it easier for vaulters to perform difficult maneuvers that require handsprings on the approach. The width of the table provides gymnasts with a bit more room for error when executing such routines.

I understand that running straight into the horse’s front end is not pleasant. I’ve seen it happen in person. But mistiming an approach, while painful, is a mistake, as is botching a landing. You get deductions for mistakes. Creating a vault with curved padded front to minimize disasterous collisions is one thing; adding a larger surface area to make difficult manuevers easier for vaulters is another. Gymnasts now have an unfair advantage over previous generations of gymnasts. If Mary Lou Retton was able to score a perfect 10 on the horse, why can’t these girls?

What’s next? Widening the balance beam by a couple of inches so that the chance of falling off while performing complicated elements in close succession is less likely?